Originally collected as a series of pamphlets made only for the high priesthood of the Church of Satan, the rituals in this book are multi-cultural and expand on the method of group ritual for Satanists who are interested in the works of Anton LaVey.

The Satanic Rituals serve as a companion to the Satanic Bible, so reading it by itself will not give you a complete idea of how Anton LaVey wanted his rituals to work. Once you have read the Satanic Bible, this ritual book will provide you with the necessary skills on how to perform Satanic ritual.

Some of the rituals included are his infamous “Black Mass” and the history behind this controversial ceremony. An example of a Satanic Baptism is also included.

One reviewer mused, in the words of LaVey: “A must have. The Satanic Rituals and The Satanic Bible are the two most influential books I have ever read. Satan demands study not worship!” Quoted from the introduction: “The ingredients of Satanic ritual are not designed to hold the celebrant in thrall, but rather to serve his goals.

Thus, fantasy is utilized as a magic weapon by the individual rather than by the system. The essence of Satanic ritual and Satanism itself, if taken up out of logic rather than desperation, is to objectively enter into a subjective state.” 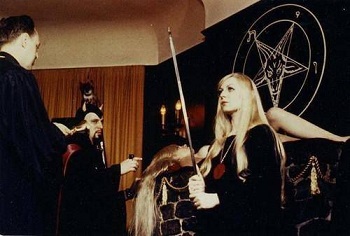 One thought on “The Satanic Rituals: Companion to The Satanic Bible (by Anton Szandor LaVey)”